Unlike other traditional methods of heating food, a microwave is a kitchen appliance that heats meals evenly and quite fast. In about 3–5 minutes, a microwave can heat your food, making light work of meal preparation.

Ever since it was introduced, it has become quite popular. It is used in restaurants, aeroplanes, cruise ships, you name it. At the moment, a microwave is an appliance that’s considered a must-have in every home.

The microwave oven was invented by a man named Percy Spencer. He was a brilliant engineer who had a knack for science. When World War I ended, Percy Spencer joined an American company that designed and produced different appliances.

In 1925, the company was rebranded and changed its name to Raytheon manufacturing. While it’s an old company based in the United States, it is still alive and produces military equipment like electronic warfare products, missiles, military training systems, and missiles.

Afterwards, Spencer became a valuable employee of the company. Whenever anyone had a scientific challenge, Percy Spencer was the engineer that sorted out the issue; he was involved in the development of different detonators and proximity fuses.

Percy Spencer also worked on radar systems that used magnetrons—an electronic device that produced microwave radiation for military radar. He also worked on different parts of a shortwave radio transmitter that produced radio waves. While scientists knew that microwave radiation could heat materials, that technology had not been fully developed and integrated into a kitchen appliance.

Surprisingly enough, Percy Spencer accidentally discovered that short-range waves can heat foodstuff in a matter of minutes. In 1946, as Percy Spencer was working on a magnetron radar tube, he noticed that the chocolate bar in his pocket had melted.

Since Percy Spencer was a curious man that was amazed by scientific appliances and concepts, he ran another heating test using a magnetron tube that produced electromagnetic radiation. Instead of using a candy bar, he used an egg to test whether microwaves could cook an egg or not.

A few minutes later, the egg exploded and covered his face with egg white. Percy went further and put popcorn kernels on the magnetron tube. He realized that it could pop popcorn. With a curious mind and the necessary equipment to bring the idea to life, Percy invented the microwave in 1946.

With the help of other Raytheon engineers, Percy Spencer was able to develop his idea further. Other engineers and members from Raytheon supported him in his cause.

Lawrence Marshall and Fritz Grozz played a crucial role in the development of the first microwave oven, which was known as the Raydarange. Lawrence was the president of Raytheon. He offered strong leadership and financial support during the appliance’s development.

This patent resulted in the Raytheon Raydarange in 1946. It weighed a couple hundred kilos & was water cooled. It would be another 30 years before microwave cookers were simple & cheap enough for household kitchens. pic.twitter.com/AGwDqSkrjF

On the other hand, Fritz was the chief-engineer of the equipment department. From time to time, both Fritz Gross and Lawrence Marshall met in a laboratory to run heating tests on the magnetron tubes.

For instance, in one of their meetings, they attached a magnetron tube to a galvanized trash can and used it to heat water.

Lawrence and Fritz used a cabinet to experiment with the effects of a magnetron tube on different types of foodstuffs. In fact, they put gingerbread in the cabinet and heated it using short-range waves.

While Percy Spencer ran some tests on the magnetron tube to determine its heating properties, Marvin Julian Block was the engineer that helped Spencer integrate his idea into commercial equipment.

Marvin Julian Block engineered the first commercial microwave oven, which was known as Raydarange. He was an electrical engineer in Raytheon labs. Later on, he became the head of the microwave heating laboratory in one of Raytheon’s laboratories.

In 1947, one year after Percy Spencer’s Eureka moment, Raytheon introduced the first commercially-ready microwave oven in the commercial market. It was known as the Raydarange and weighed over 340kg. Yes, you read that right. While it was a new appliance that was supposed to make life much easier, it did not make too many sales as anticipated.

Powered by large 1.6KW magnetron tubes, the first commercial microwave by Raytheon was mostly used in restaurants and airplanes to heat foodstuff. For maximum efficiency, the magnetron tubes had to be cooled by water. In other words, Raydarange was a water-cooled microwave.

But that was not the end. Actually, things were just getting started.

When Did Microwaves Become Popular?

It wasn’t until 1967 that microwave ovens became popular and many households started to purchase them. Not to mention, microwave cooking became the new normal. By the end of 1975, it was making one million sales in a year.

Microwaves are electromagnetic waves that move through space. It is a combination of both magnetic and electrical waves.

Microwaves are used in different industries to make work easier. One of the most basic applications of microwaves is the heating of food using a microwave oven.

A microwave oven comes with a magnetron tube that produces microwaves, which heat up food. For maximum efficiency and even distribution, microwaves produced in the oven are reflected within the appliance by the metal walls of the oven. When microwaves are reflected evenly, they trigger the water molecules in vegetables and food to vibrate vigorously. The vibration produces heat energy that heats up your food in a matter of minutes.

How a Microwave Oven Heats Up Food

While many people are quite concerned about the effects of microwave cooking, it is quite crucial to note that microwave ovens do not contaminate meals with any radiation. The microwave energy is converted to heat energy, which is absorbed by food.

Microwaves heat up food from the outside. The outer layer of food is heated by microwaves, while the inner layer gets heated through conduction; as the outside particles begin to vibrate and heat it, it causes the inner particles to do the same, and so on and so forth.

Unlike other methods, heating food using a microwave is energy efficient. The energy produced from short-range microwaves is used to heat up meals only and doesn’t heat up other parts of the microwave. And since this equipment is energy efficient and quite effective in heating up food and beverages, it helps you save your money.

So, did Percy Spencer know about the effects of microwaves?

Well, in 1946, the effects of short-range waves on the human body had not been fully researched yet. It was quite hard to tell whether microwaves were harmful to the human body or not. Doubts started emerging years later. In the ’70s, reports started to claim that the microwave oven was not as safe as it was advertised and campaigned.

In March 1973, Consumers Union issued a warning, stating that the microwave oven was not completely safe because it emitted some radiation. Plus, there was no data that showed safe levels of radiation. To counter the claims of the Consumers Union, the Food and Drug Administration Committee presented the credibility of their radiation standards to the Senate Commerce Committee during radiation proceedings.

In the end, the Consumers Union just warned consumers about the effects of the microwave. The members said that they would change their minds if they were provided with enough data to show that microwaves were not harmful.

Advantages of Using a Microwave Oven

Ever since the microwave was invented, life became much easier. These are some of the advantages of a microwave: 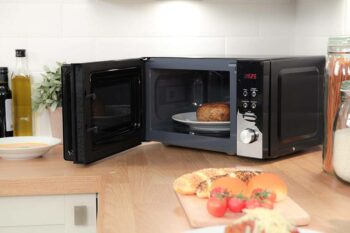 1.  A Microwave Heats Meals in the Shortest Time Possible.

As described earlier, microwave technology makes it possible for you to heat food in a matter of minutes. This saves you time as you are warming or cooking food.

2. It Defrosts Food Quite Fast.

Instead of waiting long hours for your food to defrost, you can put it in a microwave to defrost it completely. In about 3-5 minutes, the food will be defrosted completely and safely.

When compared to other methods of warming meals, a microwave is one of the most energy-efficient appliances for warming food. The microwave power rating of most microwaves is about 600-1200 watts.

Not to mention, the energy that is produced in the microwave doesn’t get absorbed by the interior compartments/parts. It is concentrated on the food only.

Most microwave ovens have an automatic shut-off feature that saves on energy. When a meal gets heated completely, the microwave shuts off automatically.

4. A Microwave Oven Is Easy to Clean.

Most microwave ovens also have a smooth finish that can be cleaned easily whilst most will have a glass window, which can be cleaned with a damp cloth. To clean a microwave, you only need a damp towel and some soapy water. Once you finish cleaning the microwave, be sure to rinse it thoroughly with a clean cloth to remove any residue.

5. A Microwave Oven Doesn’t Affect the Taste of Your Food.

A microwave heats food quite fast and doesn’t affect the flavour of your food. Since it comes with an automatic shut-off feature, it doesn’t overheat or burn your food. What’s more, a microwave does not destroy the nutrients in your food. If anything, it retains nutrients since the cooking time is significantly shorter.

6. Microwave Ovens Are Safe to be Used Around Children.

Most microwaves have a child lock feature that prevents kids from tampering with the interior compartment. A microwave doesn’t heat up food in an open space. This appliance heats up food in an enclosed compartment that can’t be accessed by kids. 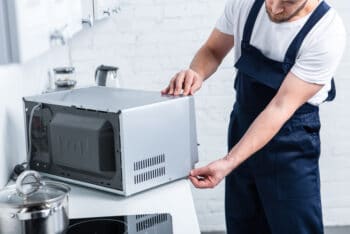 While a microwave heats food quite fast, it emits radiation that might be harmful once it comes into contact with the human body. Consuming food from a microwave is safe. However, using a faulty microwave can expose you to radiation, which might negatively affect your overall health.

For instance, a microwave with holes poses a great risk to your health. Hence, you should check for defects after every two months. If you find one, you can either or have it professionally repaired or dispose of it correctly.

The history of the microwave dates back to 1946 but who would have thought that it was invented accidentally?

That discovery has reduced the maximum amount of time that is required to warm food. Thanks to Perry Spencer, we can heat meals in 5 minutes or less. Not to mention, a microwave makes it easier for you to cook food, too.

This handy kitchen equipment has become a must-have in every household. And due to its ever-increasing popularity, countless quick and easy microwave recipes have been developed.

Now that you know when was the microwave invented and the story behind its development, what are your thoughts on microwave cooking? Let us know in the comments below.

Ian loves everything that revolves around the home improvement niche. He loves trying out new home appliances. He has also handled a lot of equipment and has a lot of insight. Plus, he’s worked on various home improvement projects that became a success. If Ian isn’t busy working on his latest project, you can find him reading up about another one!

Table Of Contents
Scroll to Top